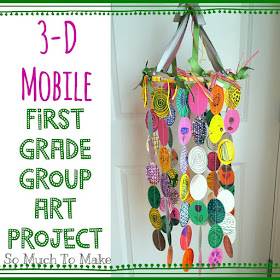 Each year our elementary school has an auction to raise money for the art program. As my daughter's classroom docent, I had to come up with a group project for the class to contribute to the auction.

In the past, I have led the class in creating a collaborative canvas.
This is from 3 years ago (I was docent to 2 classes): 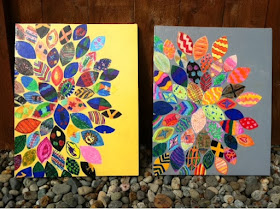 This is from 2 years ago: 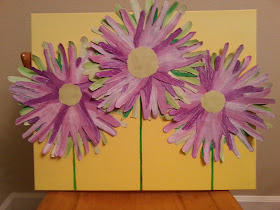 This is from last year: 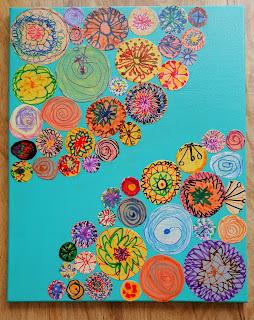 I really like to see the individual handiwork of each student manifest in the final product. I love seeing the uninhibited creativity of their little minds shining.

This year, I decided to go mixed media 3D on our project by helping the class create a mobile.

For this mobile project, you will need: 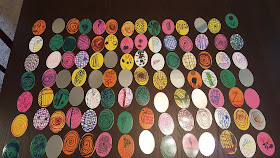 I began with an oval die-cut (in teacher's workroom) and several colors of cardstock.  I included one cardstock that was mirrored metallic on one side. I thought the light-catching element would be nice in a mobile. I cut enough for each child to have 4 ovals in the art. Circles or triangles would also make super cute designs for this piece.

I gave the students ideas and some instruction on decorating each of their ovals with sharpie and crayon.  I included swirls, plaid patterns, pictures of "vegetation" (that was their new vocab word of the day), and I required that they each put their first initial on one oval--as their "signature" on the piece. My daughter's teacher was kind enough to laminate them for me. 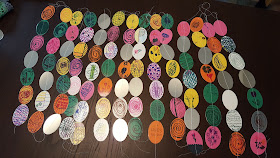 After I cut them all out of the laminating (about 40 minutes in the car at the soccer fields), I laid them out in the order I would be sewing them.
Then I sewed them together. If you have never sewed through paper, it is easy-peasy.  Just begin at the top, backstitch to tie-off just like you would on fabric, then feed each new piece in as you come to the end of one.  Be sure to leave some thread "tails" on the top end of each of your rows. We'll use those later to attach them to the hoop. 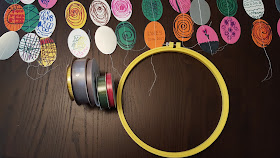 I measured the width of all my strings of ovals laid next to each other to determine how large my embroidery hoop should be before I bought it. Mine was 30 inches in circumference. I also bought some inexpensive ribbon that would coordinate with the colors of the ovals.

Now, on to the assembly: 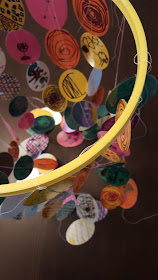 This part isn't hard, but it is a bit tedious. Tie each row of ovals to the embroidery hoop, going around both rings using a square knot. 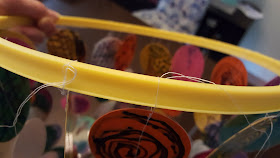 Slide each piece around to evenly place the rows around the hoop. 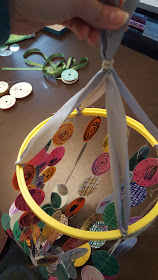 Cut four lengths of ribbon 24-28 inches in length.  Tie double knots in each ribbon length at its center to four "corners" of the circle. Gather these doubled ribbons with a rubber band to create the top of the mobile. 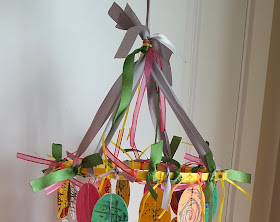 Tie short cuts of ribbon all around the hoop and over the rubber band on the top. I used some of the ribbons sticking out above the rubber band to tie on a loop ribbon for hanging. 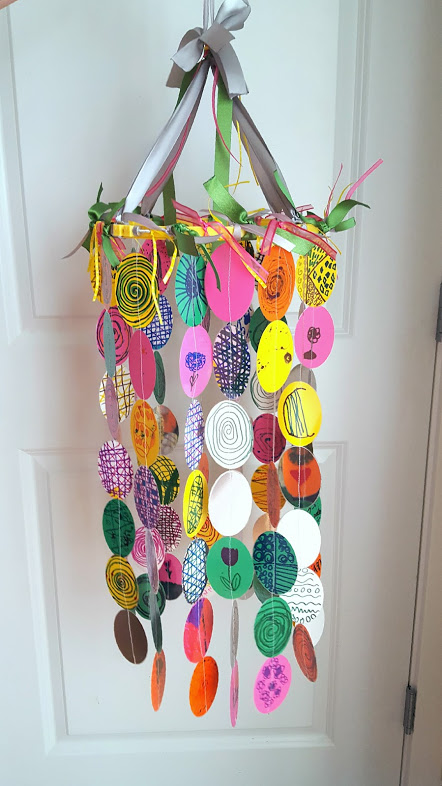 The students were SO excited to see what their ovals had become!  I think this could be such a cute piece to hang in a child's room or above a baby's crib (out of reach, of course!).  I think a mobile done just in black, white and silver would be striking. Or one in all blue or all pink tones would be fun. The possibilities are endless!
Kelly at 11:06 AM
Share